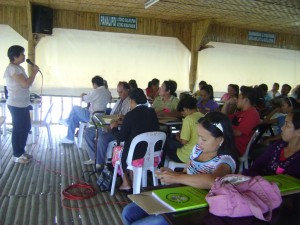 Sixty-six (66) participants from Maribojoc attended a four-day extensive Fourth Level Training on Registry System for Basic Sectors in Agriculture or RSBSA held at the Parola Hall in San Juan, Poblacion from September 24-27.

The qualifications of the field interviewers, as set by the NSO, are the following: preferably a resident of the barangay, not more than 45 years old, college graduate or completed at least second year college, physically fit and able to travel, with good moral character, with legible handwriting in printed capital letters and able to speak the local dialect.

The RSBSA Task Force in Metro Manila attended the first level training, the second level for the Regional Team while the town’s Registration Team participated in the four-day Third Level Training held in Tagbilaran City a couple of weeks ago. The RSBSA Registration and Supervision in Maribojoc will run from September 24 until November 7 and MPDC Chiu is the focal person and overall supervisor for the municipality.

It is expected that the consolidation of the accomplished forms at the barangay level will start on October 1 and end on November 9. The MPDC is tasked to consolidate all forms and submit it to the NSO provincial office on or before November 23. The provincial, regional and central offices of the NSO will take charge in the data processing from December 3, 2012 until June 28, 2013. The creation of the RSBSA database will be from July 1 to 5, 2013.

RSBSA is an undertaking of the Cabinet Cluster on Good Governance and Anti-Corruption (GGAC) of the national government. One of the GGAC’s priority programs of action is the digitization of basic agricultural information that includes the profile of farmers, farm laborers and fishermen with their farms, as well as their farming and fishing activities.

According to DBM, the results of RSBSA activity shall be used in formulating effective policies and programs and delivering basic services to the agriculture sector. #

September was declared as Civil Service Month through Presidential Proclamation No. 1050, s. 1997, by then president Fidel V. Ramos. For this year, the theme is “Kawani, Ikaw ang Isang Lingkod Bayani!” The month-long anniversary celebration aims to promote, showcase and celebrate heroism in public service, and to highlight stories of triumph and sacrifice among the men and women in government.

The commemoration undertaken by the town is one of the many activities identified by the Civil Service Commission as a way to celebrate the birth of the Philippine Civil Service. The activity dubbed as “In a R.A.C.E. to serve Fun Walk,” celebrated the call of local government units around the country for change on the delivery of public service to the populace.

Municipal Civil Registrar Maria Lita Valles-Campos shared that by advancing Responsive, Accessible, Courteous and Effective public service, people will work hand in hand with their local government for the latter to do its mandate.

The Fun Walk had a registration fee of P50 for officials, national employees and department/office heads; while the regular and job-order employees paid P20. Ma. Cirila A. Aldion, Admin. Disbursing & Liquidating Officer of the Municipal Treasurer’s Office, reported that the proceeds amounted to P4,680.00; these were used to augment the expenses of the walk-for-a-cause and the coastal clean-up afterwards.

After a short break, all Fun Walk participants proceeded to their assigned areas to start the Municipal Coastal Clean-up activity that coincided with the yearly celebration of the International Coastal Clean-up every September. Among the areas for tidying were the Poblacion Waterways, the Port area and the Mangrove Areas near the town center. Punong barangays were enjoined to organize their own clean-up activities at their respective barangays.

On Tuesday, September 25, at 1:00 p.m., regular employees of the local government will attend a GSIS Members’ Forum at the Dr. Abundio Echavez Memorial Sports and Cultural Center. The GSIS Bohol Field Office personnel will facilitate this meeting. # 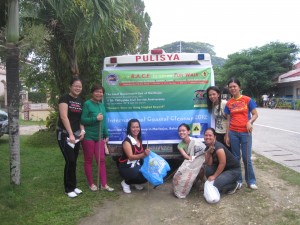 Municipal Planning & Development Coordinator, Engr. Yanie R. Chiu (second from left) and company, rests for a while before proceeding to the Municipal Coastal Clean-up that followed the Fun Walk activity. Standing beside Chiu is her daughter, Deo Maureen Reyes Chiu, RN, who recently passed the licensure examination for nurses and participated in the two activities as a concerned member of the community. Sitting from left are MDRRM Coordinator Paz Pantollana Celades, MPDC staff Ninia C. Alcoseba and An-an C. Baron. Also standing from right are FO1 Rosalie D. Batingal, BFP and Mayor’s office staff Nesty Mae Flores.  Their group was assigned in the mangrove areas near the Maribojoc Presidencia.

Major outputs of the Forest Land Use and Integrated Resource management Planning-Module 1 and 2 workshops were presented last Thursday to members of the Sangguniang Bayan of Maribojoc, led by Vice-Mayor Fructuoso ‘Tusoy’ Redulla, Jr.

The Forest Land Use Plan-Technical Working Group (FLUP-TWG), created in July 2009 through an executive order issued by Mayor Leoncio B. Evasco, Jr., initiated the one-day event at the town’s Parola Hall. The activity was held before the FLUP-TWG will proceed to holding the Module 3 Workshop, which is the Plan Writing and Legitimization of the FLUP.

The SB members raised important points regarding the FLUP data and the workshop outputs, their comments & recommendations will be used in the final planning and plan-writing stage scheduled this year. Concerned Punong Barangays were also present and supported their respective barangay proposals, especially in the allocation of the Forest lands for different uses.

DENR-CENRO Forester Salem Quiwag applauded the municipal government for the significance given to the FLUP process. Forester Salem ended his message with this, “We do not dream to leave problems to our people; we dream to give them good things. That is public service for the good of the people.”

The FLUP project of the local government, a partnership with DENR through a memorandum of agreement signed in 2009, follows a speedy process compared to the usual seven-module program implemented in other towns. # 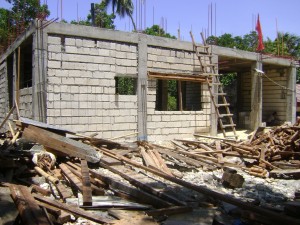 The people of Maribojoc will soon have access to better health and birthing facilities, as the Phase 1 of the two-storey Municipal Health, Birthing and Day-Care Center is ongoing.

The new two-storey building will have health facilities including a birthing facility, an infirmary clinic and a day-care center. It will have enough space for the maternal delivery services and an appropriate room for patients that need to be isolated from patients of common diseases during consultations and medications.

The local government will also procure new medical equipment so that local patients will have access to these facilities without spending much of their hard-earned income. The health center will also include a child-friendly day-care center.

It can be recalled that the mother of Mayor Leoncio B. Evasco, Jr., the late Toribia Badilla Evasco, was the town’s pioneering public health nurse and was the one who facilitated and requested the assistance of the Philippine Charity Sweepstakes Office back in 1956 for the construction of the old health center.

Evasco, who has been working out the financial assistance from DOH as early as April 2009, said, “Minor repairs for the old health center were not sufficient since the town has been utilizing the health facility since 1956.”

The construction of the new health facility is an infrastructure support for the health and children’s development program of the local government. #

“Hidden Treasures – An exhibit of Spanish-era Churches in the Philippines” 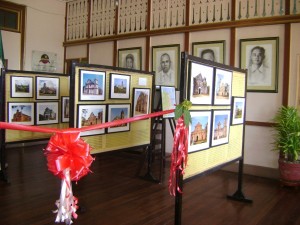 Maribojochanons had several nostalgic moments as they gazed at the different churches in the country and remembered the times when they visited some of them. From August 22 to September 1, 2012, parishioners, locals, teachers and students alike admired the various photos displayed in the exhibit initiated by the Ortigas Foundation, Inc. in partnership with the Ramon Aboitiz Foundation, Inc. and the local government of Maribojoc. 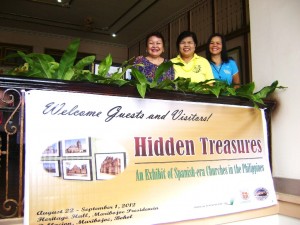 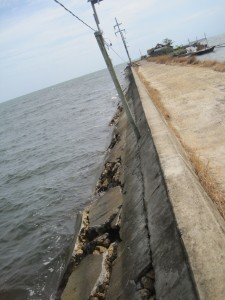 The Disaster Risk Reduction and Management Council (DRRMC) of the municipality of Maribojoc reported that an open area of the PPA wharf in Sitio San Juan, Poblacion was destroyed last July 24. Although Storm ‘Gener’ did not hit the town, strong ‘habagat’ winds that went with it caused heavy, high and constant waves to break the riprap at the left side of the reclaimed area from the Parola to the extreme end of the road. Municipal Engineer Raul Bernard A. Jabines said that the estimated cost of the damaged is around P800,000.00.  Maribojoc DRRM Coordinator Paz Pantollana Celades