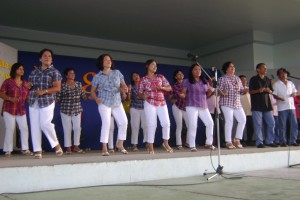 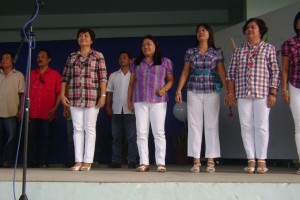 Selected employees of the municipal government of Maribojoc, Bohol shared their dancing and singing talents to fellow Maribojocanons through a SayaWit presentation last Wednesday, September 14, during the program and salo-salo held in celebration of the Santa Cruz Fiesta.

When Republic Act No. 9003 or the “Ecological Solid Waste Management Act of 2000” was approved, local government units were directed to close their respective open dumpsites in 2006.

The town’s old 0.035-hectare open dump facility previously located in Barangay Dipatlong has long been closed since February 2006. After which, waste generators were encouraged to segregate their wastes; a controlled dumpsite was operated with residual wastes contained in plastic bags and piled at the Residual Containment Area (RCA) and a Central Material Recovery Facility (CMRF) was constructed in a nearby area.

In 2007, LGU Maribojoc was informed by DENR that it had to submit a Closure and Rehabilitation Plan of Open Dumpsites, which the municipal government complied with when it submitted the plan on November 19, 2007 to the Tagbilaran Office of DENR. Consequently, the closure and rehabilitation plan of Maribojoc has been used as reference by other LGUs as they prepared their own plans.

Prior to the closure order signed by EMB-7 OIC-Regional Director Alan C. Arranguez, the town already operated a controlled dumpsite where the CMRF, RCA and the Vermi-aided composting plots are constructed directly adjacent to the closed open dump facility. # 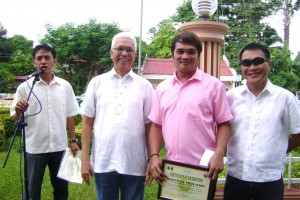 Poblacion is Most Outstanding BPOC in Maribojoc

Punong Barangay Arnulfo ‘Arnie’ D. Turco, Jr. of Poblacion, Maribojoc, Bohol receives a Certificate of Recognition from Mayor Leoncio B. Evasco, Jr. and Vice Mayor Fructuoso F. Redulla, Jr. in behalf of the Barangay Poblacion Peace and Order Committee that was awarded as the most outstanding BPOC. MLGOO Ted C. Mascariñas (left, beside Mayor Evasco) led the evaluations in all 22 barangays that run from August 9-19, 2011. The committees were rated based on the following criteria: Organization, Meetings, Policies, Plans & Budgets and Accomplishment Report as well as their BPOC’s level of functionality.

Poblacion bested 21 other barangays for its sustaining efforts in maintaining peace and order and public safety through active mobilization of the Barangay Peace and Order Committee Members and ensuring the best interest of the community. Other awardees included the BPOC’s of Cabawan, Jandig, San Roque, Bayacabac, Pagnitoan, Bood, San Vicente, Lincod and Dipatlong. The awarding of the Top 10 Maribojoc BPOCs was held after the municipal government’s Flag Raising Ceremony last Monday at the Maribojoc Presidencia. Fellow punong barangays and the LGU family witnessed the awarding ceremony.# 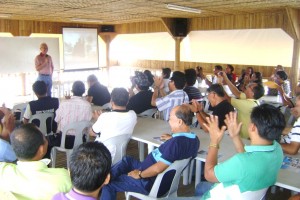 Mayor Leoncio B. Evasco, Jr. welcomes the Liga ng mga Barangay of Davao City during their Lakbay Aral in Bohol this week. Some 80 punong barangays visited the town last Tuesday led by their ABC federated president Paolo Z. Duterte to learn about the town’s achievements and projects which they hope to be able to replicate in their respective barangays back in Davao City.

During their visit, Evasco discussed the town’s interventions in livelihood, organic farming, handicraft production, coastal resource management and strict implementation of coastal law enforcement policies as well as its peace and order involvements, among other programs.

The mayor ended his talk and shared, “In any kind of governance, whether you are a mayor, a punong barangay or a governor, if you cannot focus and give importance to your resources to reduce poverty in your locality and uplift livelihood, I don’t think you can sleep well at night.”# 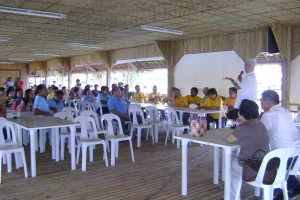 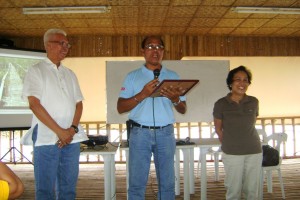 Mayor Leoncio B. Evasco, Jr. welcomed the Tagbilaran City Government in Maribojoc last Monday.  They visited the town to learn from its best practices which they could adapt and replicate in line with their Development Roadmap.

The Tagbilaran Team interacted with LGU Maribojoc as to its implementation of the following systems and processes: Revenue assessment and generation through the electronic Tax Revenue Assessment and Collection System or eTRACS, Business Permits and Licensing System, and Enterprise database management, since the town was recognized as a Small and Medium Enterprise (SME)-Friendly LGU for the Visayas.

Coincidentally, it was during their visit that Mayor Evasco was informed by the Department of Interior and Local Government regarding the town’s latest achievement as it again won a Seal of Good Housekeeping Award for 2011.  Tagbilaran City Vice Mayor Nuevas T. Montes and OIC City Administrator Eduardo C. Macalandag led the 40-member team composed of department heads, members of the Performance Governance System Technical Working Team, staff from the Center for Local Governance and Development, Sangguniang Panlungsod members and secretariat and the Vice Mayor’s Office staff. #

Mayor Leoncio B. Evasco, Jr. knew of the recent recognition for Maribojoc when DILG posted in its website the Seal or SGHK recipients for 2011. Evasco, who relayed the good news to his constituents, said, “This award deepens my belief that real public service should be brought to the level of good governance.”

Last year, the town was one of the 15 municipalities all over the country recognized by DILG for their good performance in internal housekeeping. 2010’s assessment focused on the areas of good planning, sound fiscal management, transparency and accountability, and valuing of performance information.

SGHK, formally launched by DILG last March 17, 2011, expanded its coverage this year to include all local government classifications.  Evaluation areas were modified to sound fiscal management, transparent and accountable governance, valuing of performance management, and general impressions on the local government.

The Seal is a requirement in accessing the Performance Challenge Fund, a grant given to local governments to finance development projects. Maribojoc continues to utilize its 2010 P1M PCF for its Maribojoc Integrated Resources Development and Management Program.