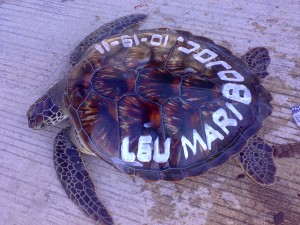 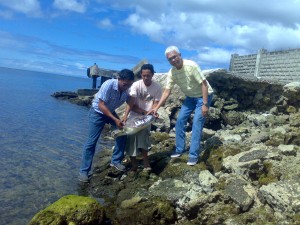 Mayor Leoncio B. Evasco, Jr. and Edgar Delfin (far left) of DA-BFAR Region 7, with LGU Maribojoc employee Demoy Baluma, releases a ‘Pawikan’ accidentally caught in Maribojoc Bay by a group of fishermen. Mr. Feliciano Arocha and company unintentionally caught the turtle in their nets while fishing along the bay around 11:00 a.m. last October 18. After the incident, Arocha immediately informed Maribojoc CRM Officer Loloy Dumandan and Mayor Evasco. They released the 18by24 inch-turtle last Wednesday at the Port of San Juan, Barangay Poblacion, Maribojoc, Bohol. #

The ecosystems approach to fisheries represents a move away from management systems that focus only on the sustainable harvest of target species. It focuses on a system that also considers the major components of an ecosystem, including associated species, habitats and vulnerable species, as well as the social and economic benefits that can be derived from harvesting fish and the governance issues to be addressed for sustainable use.

The WorldFish Center implemented the AQUADEV project this year with funding support from the Technology Application and Promotion Institute (TAPI) of the Department of Science and Technology (DOST). The overall objective of the project is to strengthen communities including local government units (LGUs) in managing small-scale fisheries and promoting the development of sustainable small-scale aquaculture in coastal communities.

Sponsoring organizations for the training were Agham Partylist, TAPI, DOST-Region VII and The WorldFish Center. # 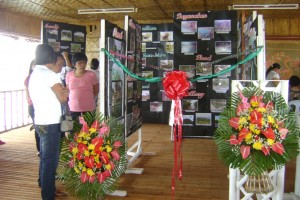 A Photo Exhibit, featuring the attractions of Maribojoc’s 22 barangays as well as their emerging sites, highlighted the Tourism Stakeholders’ Summit last Wednesday at the Parola Hall in Barangay Poblacion, Maribojoc. 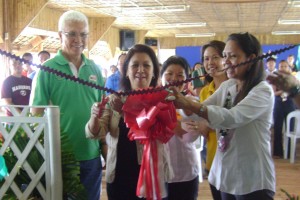 Ms. Miriam Bacalso of GIZ and Bohol Tourism Officer Josephine Cabarrus (second and third from left) led the ribbon-cutting ceremony of the Photo Gallery during the Tourism Stakeholders’ Summit in Maribojoc last Wednesday. Assisting them are Mayor Leoncio B. Evasco, Jr., PROCESS Bohol Executive Director Emilia Roslinda and Municipal Councilor and SB Committee on Tourism Chair Andresa ‘Lalai’ E. Pohl. The photo exhibit presented the attractions of the town’s 22 barangays as well as their emerging sites.

The municipal government of Maribojoc, in partnership with German International (GIZ) and Department of Trade & Industry (DTI) Bohol, conducted a Tourism Stakeholders’ Summit last Wednesday at the Parola Hall in Barangay Poblacion.

The town, the first to hold a Tourism Summit in the province, convened more than 80 stakeholders from various sectors. The Summit’s main objective was to come up with an updated Multi-sectoral Tourism Development Agenda that will incorporate the guiding principles of the National Tourism Act and aid in strengthening the relationships of development partners and stakeholders.

Summit participants were composed of representatives from the Business Sector giving accommodation, food, transportation, tours and ticketing services, among others. Chairpersons of the Sangguniang Bayan (SB) and Barangay Committees on Tourism also gave their inputs on the different issues and concerns affecting the town’s tourism industry. Also in attendance were representatives of People’s Organizations, the Local Government Unit, members of the Municipal Eco-Heritage Tourism, Culture & Arts (MEHTCA) Council and those from the Academe.

Evasco shared that all stakeholders should recognize what role Maribojoc should play in the development of Tourism. According to him, “It should be the People’s Organizations who are at stake at developing our Tourism Destinations and I am giving my 100% support in initiatives that will help Tourism.”

All workshop outputs were presented to the plenary and the next steps were identified. The Lincod Cultural Collective prepared a closing ritual to conclude the activity. MEHTCA Officer Mary Annie G. Jabines and MPDC Chiu coordinated with GIZ and DTI concerning the preparations of the summit. #

The municipal government of Maribojoc launched its’ third wave of Mobile Service Caravan in Barangay Punta Cruz last September 22. The first two service caravans were held in 2009 and 2010. Residents of barangays Guiwanon, Lagtangon, Bood and Dipatlong were recipients of the service caravan since its launching in September.

The caravan also coincided with the launching of Candavid’s own communal vegetable and fruit garden under the “Himsug nga Pananum, Himsug nga Katawhan Program.” A covenant signing was undertaken to ensure the continued implementation of the program by all stakeholders. Heirs of Hildegario Angelia were awarded a certificate of appreciation for allowing the barangay to temporarily use their land for the communal garden.

Candavid residents trooped to the barangay hall compound to avail of medical services from the Municipal Health Office and planting materials from the Municipal Environment and Natural Resources Office, among others. The Municipal Eco-Heritage Tourism, Culture and Arts Office and the Municipal Agriculture Office (MAO) showed video presentations to students of the Candavid Elementary School, including a school level orientation on the Natural Farming System. MAO also offered services on dog vaccination, registration and castration.

The Municipal Planning and Development Office held a meeting with the Barangay Council to monitor their initiatives on their Ecological Solid Waste Management program. The Municipal Social Welfare and Development Office conducted renewal and updating of PhilHealth membership, accepted applications for the Senior Citizens’ Pension and IDs and held a Day-care Supplemental Feeding.