Maribojoc has again proven that political will and good governance are fundamental in the development of a town.

The LGU-Led Cadastral Survey/Simultaneous Systematic Adjudication Project of Maribojoc, the first in the whole country, has been selected as one of the Ten Outstanding Local Governance Programs in the Galing Pook Awards 2011.

Galing Pook Foundation Executive Director Eddie G. Dorotan relayed this good news to Mayor Leoncio B. Evasco, Jr. in an official communication received by the latter last Thursday. According to Dorotan, the awarding ceremony, tentatively scheduled on the fourth week of January 2012, will be at the Malacañan Palace.

The local government was recognized for its leadership in providing tenurial security to people who waited 43 long years. It was in the 60’s that Maribojoc saw the first surveyor commissioned by the Department of Environment and Natural Resources (DENR) to do cadastral surveys in the town. Since then, several surveys have been conducted and all these were unproductive. Until the local government had to step up and take the lead for change to take place.

Mayor Evasco confirmed that collaborative and complementary efforts between the local government, the stakeholders, DENR and the Register of Deeds made the program successful. Evasco added that the on-going program, whose implementation started in October 2008, coincidentally held its’ 10th land title distribution last November 13 at the LGU Parola Hall in Barangay Poblacion.

It can be recalled that after persistent lobbying by Mayor Evasco, the town became the first LGU-led participant to the Land Administration Program 2 (LAMP2) project of the Department of Environment and Natural Resources (DENR). The LGU-Led program freed the DENR-PENRO Bohol from the nitty-gritty of the project administration and management.

LGU Maribojoc identified the following components to be undertaken: Information, Education and Communication (IEC) Campaigns, Field Interviews and Ocular Inspections, Documentation and Processing, Initial Screening of Applications and Monitoring and Evaluation and assistance is provided by punong barangays and residents in the actual conduct of the survey. In January 2009, DENR and the local government signed the MOA that details their responsibilities.

DENR-PENRO Bohol’s responsibilities were: to provide technical supervision and survey team; to monitor the actual progress of the survey together with the LGU; to verify the completed survey to avoid overlapping; to approve technical descriptions of the cadastral surveys; to determine barangay boundaries; to provide cadastral map of the approved survey; to delineate/exclude land as considered salvaged zones, watersheds, municipal/barangay roads; to train LGU personnel assigned as CDAs and adjudicators; and to process free patent applications (FPAs) with DENR-Project Implementation Office and the Register of Deeds.

Since the project started, land valuation has appreciated and there has been a significant increase in Real Property Tax (RPT) collection. Years before project implementation, the town only collected P258,137.24 in 2000 and P677,016.08 in 2008. However, in 2009, the annual RPT collections totalled to P1,088,789.64 and from January to May this year, the local government has an RPT collection of P792,949.88. The LGU’s local income has also increased because of certification fees and payments of arrearages. Red tape has been done away with in the local government and there is a simplified, rapid and fast acquisition of land titles.

LGU Maribojoc has taken an active part in the land adjudication survey, and it will continue until all landowners will be issued a legal document confirming ownership of their land. It is no less a significant factor in alleviating poverty. # 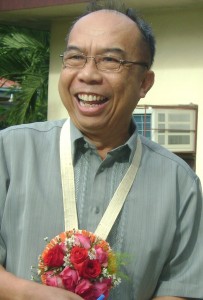 The weeklong celebration of the National Government Employees’ Week of the local government of Maribojoc was graced by Argeo Jala Melisimo, president of the First Consolidated Bank and currently co-chairman of the Regional Development Council 7.

Melisimo considered the celebration an opportunity to share to municipal officials and LGU employees his experiences of working in the private sector and his partnerships with government and institutions.

Melisimo, who started as a clerk/driver at FCB and rose from the ranks, shared that service to the people must emanate from within the worker. He recalled that ‘serve the people’ was their battle cry back then in the 70s and 80s and how they put their lives on the line with this advocacy.

He reminded the LGU Maribojoc family that there are similarities in both government and private sector in the standard of servicing customers, clients or constituents – which is the delivery of quality service.

“The most common sense benchmarked of quality service is how we want ourselves treated when we approach government or private business. Quality service includes the speed and efficiency in addressing the clients concern and problems. Workers in government need to walk an extra mile in the handling of your clients.”

Melisimo ended his talk with, “Let’s create a bandwagon of quality service such that it devours us and create a culture of service and empathy. Service to the People should be a battle for all.”

A consistent honor student in his college days, Melisimo is an alumna of Holy Name University, having taken his Bachelor of Arts in English and Bachelor of Science in Commerce major in Accounting courses in the said school. # 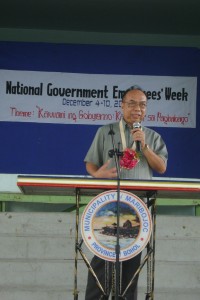 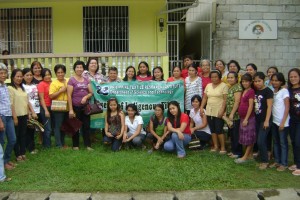 33 Maribojocanons graduated from a three-day Skills Training in Dyeing of Indigenous Fibers conducted by the Department of Science and Technology in coordination with LGU Maribojoc. Ms. Adela H. Montalva and Ms. Donna C. Aguilar of the Philippine Textile Research Institute of DOST of Bicutan, Taguig City were the resource persons to participants that included DepEd supervisors, principals and teachers as well as representatives from people’s organizations and barangay councils. Maribojoc Center for Livelihood Enterprise Development (MaCLED) Officer Jaime Ll. Mabilin coursed the invitation through DepEd Maribojoc District and the 22 Barangay Councils of the municipality. The training was held from December 6-8, 2011 at the Poblacion Barangay Hall.