After the courtesy call and viewing of the “Hidden Treasures Exhibit,” the group proceeded to the Punta Cruz Watch Tower in Barangay Punta Cruz for further interaction with the local government and with local people’s organizations on its various Australian Agency for International Development (AusAID)-assisted projects.

Maribojoc is a recipient of several projects from AusAID, one of which is through the Local Governance Development Program’s electronic Tax Revenue Assessment and Collection System or eTRACS, a revenue assessment and generation program implemented by the local government unit.

Another AusAID-funded project is the Land Administration and Management Program (LAMP)-Phase 2 of the Department of Environment and Natural Resources wherein Maribojoc was the first LGU participant. The town is the original local government in the country to initiate an LGU-led Cadastral Survey/Simultaneous Systematic Adjudication Project. The said project was selected by the Galing Pook Foundation as one of the Ten Outstanding Local Governance Programs in the 2011 Galing Pook Awards. Likewise, Maribojoc is a two-time winner of the Seal of Good Housekeeping award for 2010 and 2011 given by the national government through the Department of Local and Interior Government (DILG).

In addition, the agency also funds the “Building Enterprises in Support to Tourism in Bohol (BEST in Bohol) project, helping the town’s weaving industry whose beneficiaries include weavers from Pagnitoan, San Isidro and Candavid Association or PAGSACA. AusAID also supports the Water and Sanitation (WATSAN) project through the Barangay Candavid Waterworks. The barangay local government and Candavid Women co-manage this project.

Bohol Provincial Governor Edgar M. Chatto, who had an earlier engagement in the afternoon, was able to attend the program at the Punta Cruz Watch Tower. Vice-Mayor Fructuoso F. Redulla, Jr., who led the members of the Sangguniang Bayan of Maribojoc, gave the welcome message while Mayor Evasco awarded Ambassador Tweddell with a certificate of recognition for the Australian government’s support to the people of Maribojoc.

During Thursday afternoon’s affair, members of POs and rural improvement clubs organized and assisted through the BLESSED Maribojoc were present on Thursday to display their many products and interact with Ambassador Tweddell, Minister Counsellor Borthwick, the Bohol provincial government delegation and the PRMF team.

On the other hand, the “Hidden Treasures, an exhibit of Spanish-era churches in the Philippines,” displayed at the Heritage Hall of the Maribojoc Presidencia is a project of the Ortigas Foundation and sponsored by the Ramon Aboitiz Foundation, Inc. and the local government. # 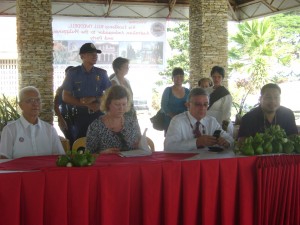 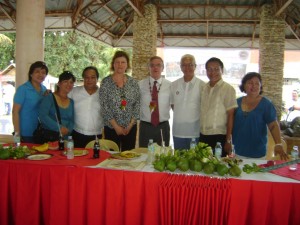 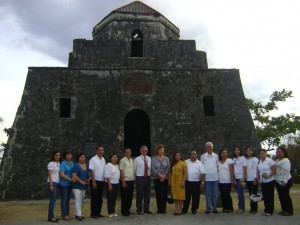 “Hidden Treasures – An exhibit of Spanish-era Churches in the Philippines” 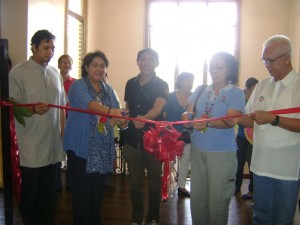 The Ortigas Foundation’s “Hidden Treasures – An exhibit of Spanish-era Churches in the Philippines” officially opened in Maribojoc through a Ribbon-cutting Ceremony held last Thursday morning at the Heritage Hall of the Maribojoc Presidencia. From left: Holy Cross Parish Priest, Rev. Fr. Warren Abarquez, Administrative Officer Beatriz Lalana of the Ortigas Foundation, Mr. Florencio A. Moreño II, and Mayor Leoncio B. Evasco, Jr. Mr. Moreño is the Curator of the Casa Gorordo Museum of the Ramon Aboitiz Foundation, Inc. (RAFI) while Dr. Gerra is the Executive Director of the RAFI – Culture and Heritage Unit. RAFI sponsors the exhibit’s Bohol-run. 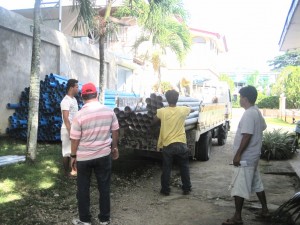 The delivery of submersible pipes and transmission pipelines last month by the winning bidders means that the Rehabilitation / Improvement / Expansion of Maribojoc’s Waterworks System from Poblacion to Punta Cruz Waterlines (Phase 1) will start as soon as possible.  Mayor Leoncio B. Evasco, Jr. guaranteed that Maribojoc will have more water once the whole project is completed. Photo by Ninia C. Alcoseba 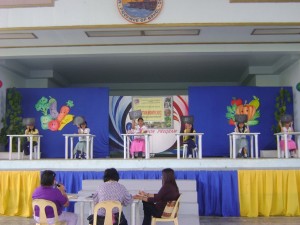 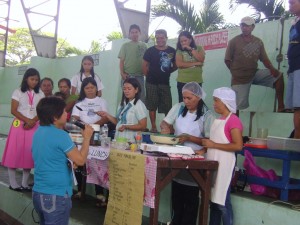 MPDC Maria Nenita R. Chiu (with the microphone) interviews teachers and PTA members from Busao National High School and Santa Cruz Elementary School during the Cooking Demonstration during the culmination. They were among PTA members and teachers from lead cluster schools who cooked healthy children’s menu for breakfast, lunch, dinner and desserts. Photo by Ninia C. Alcoseba and Nesty Mae R. Flores 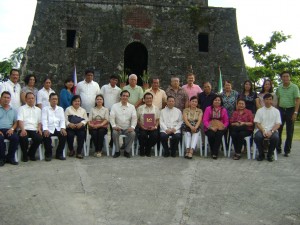 Director Jeremy M. Barns (sitting sixth from left) of the National Museum of the Philippines personally presented the National Cultural Treasure Marker of the Punta Cruz Watchtower to the people of Maribojoc during a very short program on July 23. The town’s Diocesan Shrine of Saint Vincent Ferrer was also declared as a National Cultural Treasure by the National Museum. The local government of Maribojoc was represented by Vice-Mayor Fructuoso ‘Tusoy’ F. Redulla, Jr. (beside Dir. Barns) while Bishop Leonardo Medroso headed the Diocese of Tagbilaran delegation (fifth from right).  Ms. Angelita B. Fucanan, Curator for the Archeological Sites and Branch Museum of the National Museum (beside Bishop Medroso), witnessed the affair. Also, present were the town’s Sangguniang Bayan members and its Executive Department (department heads, heads of offices & employees). Punong Barangays, DepEd Maribojoc District and members of the Municipal Eco-Heritage, Tourism, Culture and Arts Council was also invited to the affair.

Employees of the local government take a respite from their busy workload as they participate in the Nutri-Walk and Nutri-Bike Fundraiser. The LGU was able to raise P11,610 which was used to finance the different activities for the Nutrition Month celebration. LGU municipal officials & employees, administrators, principals, school heads, teachers and students from public & private schools and punong barangays attended the activity. Barangay council officials as well as civic, social and religious groups participated in the activity. 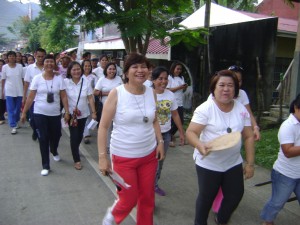 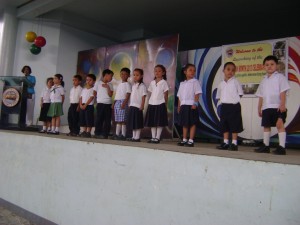 Exhibit on Spanish-era Churches to Open in Maribojoc 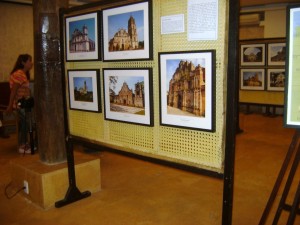 The municipalities of Maribojoc and Dauis are the lone towns in Bohol to host a travelling exhibit, initiated by Ortigas Foundation, entitled “Hidden Treasures: An Exhibit of Spanish-era Churches in the Philippines.”

The Ramon Aboitiz Foundation, Inc.-Culture & Arts Unit (RAFI), sponsor of the Bohol run exhibit, invited Dauis to host the event from August 11 until August 21 while the local government unit of Maribojoc will host it from August 22 until September 1. Putting-up of the exhibit in Maribojoc will be in the morning of August 22 at the second floor lobby of the Maribojoc Presidencia.

Florencio A. Moreño II, curator of the Casa Gorordo Museum, coordinated with Maribojoc Eco-Heritage Tourism, Culture and Arts (MEHTCA) officer Mary Annie G. Jabines as to necessary preparations for the ten-day event. The Hidden Treasures will present more than 50 churches built in the Spanish Period, a number of which are from Bohol, including the Diocesan Shrine of Saint Vincent Ferrer.

Dr. Jocelyn B. Gerra, executive director of the RAFI-Culture and Heritage Unit, noted that the goal of the exhibit is to educate people of different social backgrounds about the aesthetic value of these churches as well as their central role in creating Filipino cultural identity.

At 9:00 in the morning of August 23, Thursday, a ribbon-cutting ceremony and short program will be held at the exhibit venue. Mayor Leoncio B. Evasco, Jr. will give a welcome message; Ms. Beatriz Lalana Ortigas Foundation, Inc.’s administrative officer will talk in behalf of the sponsoring foundation, while Dr. Gerra will give an inspirational message in behalf of RAFI.

Invited guests include those from the Holy Cross Parish headed by parish priest, Rev. Fr. Warren Abarquez, representatives from local government, punong barangays, teachers and students as well as members of different people’s organizations. During the program, Dr. Gerra and Mr. Moreño will introduce the RAFI Triennial Awards to the people of Maribojoc and the province of Bohol.

The RAFI Triennial Awards, now on its sixth run, is a service and humanitarian award in the Visayas and Mindanao that recognize the philanthropic, humanitarian, and holistic efforts of individuals and institutions in enhancing the quality of life of various groups and communities.

Personnel from the BFP-MCFS and the Philippine National Police-Maribojoc Station, bantay dagat volunteers and barangay tanods actively involved themselves during the lecture-demonstration-practicum training. Barangay tanods or public safety officers from Poblacion, Anislag, San Vicente, Lincod, Dipatlong, Lagtangon, Bood, Guiwanon, Punta Cruz, Busao, Cabawan and Agahay completed the activity as they saw the need to be more prepared during rescues and emergencies.

Insp Miñoza said the training was conceptualized upon the arrival of the outboard motor and inflatable rubber boat issued to the Maribojoc Central Fire Station by the BFP National Headquarters. The said rescue equipment is now under the care and utilization of the MCFS, Insp Miñoza added.

Mayor Leoncio B. Evasco, Jr. was happy that barangay emergency responders have opportunities to refresh and enhance their skills through drills, trainings and rescue equipment. He said initiatives such as these will strengthen the MERU since they will be more aware of prevention activities and be better prepared for rescues and emergencies. # 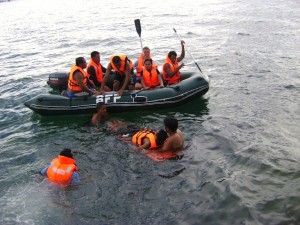 Participants of the one-day training cooperated during the Water Search and Rescue (WASAR) practicum exercise. The lone woman in the picture is MDRRM Coordinator Paz Pantollana Celades with PNP-Maribojoc personnel and public safety officers from the different barangays. 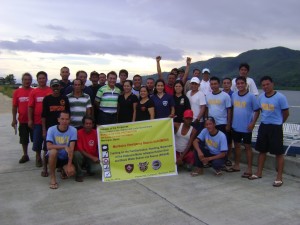 Evasco reminded local government employees, during Monday’s flag ceremony, to be cautious of their surroundings – especially electrical connections in their own houses and in their barangays. He narrated how his own family survived the August 16, 1952 conflagration that razed down several houses and the town’s public market.

The municipal mayor shared what the fire victims went through after such a devastating incident that lost around P500,000 worth of houses and properties. Evasco recalled waking up to the fire that reached a neighboring house and how he and his family quickly ran for safety.

Engr. Raul Bernard A. Jabines was instructed to inform all business owners that an evaluation of their electrical wirings will be conducted by the Engineering Department of the local government soon after. Upon evaluation, recommendations will be made to which the business proprietor will be advised to heed.

The mayor was hopeful that with a pro-active initiative such as this, the town would continue to be safe from any untoward disasters, such as fires, that can be prevented if necessary precautions are observed. # 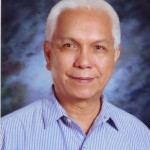 Mayor Leoncio B. Evasco, Jr. reminded local government officials, department heads, heads of offices and employees to practice austerity measures in their respective workplace. Specifically, in making sure, that expenses and expenditures will be down to a minimum so that more funds will be allotted to programs needed by the people.

Evasco reiterated to LGU officials and employees that they should be responsible in utilizing government funds. According to Evasco, the coffers of local governments have long been a constant problem of fourth-class municipalities such as Maribojoc. The town solely relies on its Internal Revenue Allotment (IRA) from the national government, financial and technical assistance from NGAs, NGOs, private institutions and individuals who gladly extend a hand in providing public service to Maribojocanons.

“In our own little way, we must try to make do with what governance can do about it,” he said. Evasco announced that he is talking with private institutions and groups who are interested to help set up a Solar Program for the town. Lower electricity consumption is seen as an outcome of a proposed plan in the near future to install Solar Panels that will be utilized for power in government buildings and water pumping stations.

On the same LGU activity, Evasco shared the passing of Paula Raagas Valles who served the Maribojocanons from 1978 until 1986 as Mayor. Former President Ferdinand E. Marcos selected Mayor ‘Daday’ Valles as acting mayor on December 10, 1978; she then became the first female local chief executive when she won during the 1980 local elections. #